Wow, where has the year gone... I said I would be better at posting and I've got worse!

So much has happened this year and I'm going to try and cram it into a short post too...

So I am still under the V.E.T about my horrible ear infection, M and D are still having to clean it every few days but at least I can hear and i'm not in pain now. The V.E.T says we'll see how it goes over the next few months but we all agree I'd rather not have any surgery.

My agility is going really well and M is really proud of how I am coping with more strange dogs and venues.. my confidence is definitely building which is good cause over the course of this year I have won out of grade 3 into 4 and then out of 4 into grade 5.. M was staggered.
I am also jumping the Low Height Option as M thinks its better for my joints especially my knee where I broke it when I was younger.

M is starting to think shes going to have joint issues from agility as well she might have to go and see the D.o.c soon about her knees!

With all my fantastic wins, I also managed to get enough points to be awarded my Agility Warrant (Bronze) which means I can put the following at the end of my name AW(B) and can start earning points towards my Silver award.

M is starting to train harder things with me now, so she's booked us into a distance handling course in February so that she doesnt have to run as much... we'll see!

Maverick was starting to cause M major headaches, although he is now jumping full height well in training, when at competition he was running out the ring to play with other dogs and generally not taking it seriously at all, however over the past month or so M seems to think he's started to grow up (although at 3 yrs old its a bit late!) hes had several good runs in the last fortnight and a fantastic try at a grade 3-5 course last weekend. He was running a bit fast and so overshot a corner (he has no brakes!) and got himself unfortunately eliminated!

M was still really proud though as she was also making major mistakes last weekend and failed to remember any of the four courses she ran correctly - so how have we got a chance... she needs to teach us to count then we could just read the numbers on the way round...

Thankfully we have all now got a break from competition for a month so we can chill out a bit over Christmas and relax - M says she's been christmas shopping and that because we've been so good SantaPaws might make an appearance - I do hope so, he always brings something good.

Woofs & Licks that you have a pawsome Christmas with your pals and humans!
Posted by Cadbury at 15:18 19 comments: 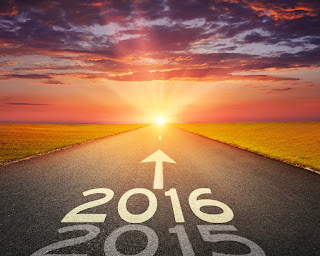 And the first post I have to write is an apology!! We're a month into the new year already and this is the first post... shock horror how bad are we!!

Well January was fun filled although the weather has been awful over here in the UK. We may not have had the snow that our US counterparts have had but the wind and rain have taken their toll!

So what have we been up to? well the first weekend in January saw us at a very local agility show (yes both of us) Maverick was still jumping at a lower height but he was jumping and his concentration was much better... I was jumping at full height and managing some speedier times and some tricky courses - M was really pleased with my 1st, 2nd, 3rd and 4th

Maverick then went with M to another show on his own and finally managed a show jumping full height - unfortunately with the higher jumps Mavericks concentration really took a beating and the dogs outside the ring became more interesting than M in the ring... M says he's a work in progress... shes going to spend the next few weeks making herself **REALLY** interesting!

I managed to pick up a little infection so went on another trip to the V.E.T and normally I'm not bothered by the vet infact I quite like it but I wasnt myself and couldnt help but shake until the nice V.E.T gave me several treats *wink wink*  Thankfully M thinks my ears are much better and that the change in food has made all the difference.. turns out I have an allergy to a dust mites which lives in food dust from the kibble...

With so much wet and windy weather we've not really done a lot, we have managed to train each week but unlike most weekends when enjoy being out playing we've been cooped up.. however M got some exercise things for us for christmas so we've been trying them out... I'm sure she'll take some photos eventually and let you all see.. They include a balance board, some homemade paw pods and a donut (unfortunately not one you can eat) 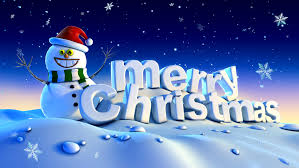 Merry Christmas from all of us here at Cadbury's World....

H and S (aka mum and dad), Cadbury and Maverick

Woofs and licks hope Santapaws brings you lots of pressies and you have a pawsome time with your human families!
Posted by Cadbury at 14:58 2 comments:

So, with Christmas around the corner M had her christmas obedience party, and decided to take Maverick (humph!)

It was going to be BIG as there are now 20 dogs taking classes with the obedience group...

We had party games, fancy dress, presentations of awards and even a visit from santa for the pawsome doggies.. 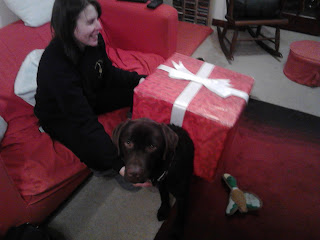 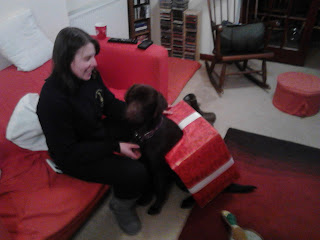 Maverick has also now completed his final agility competition of 2015 and even though he travelled with L and Willow again this time his performance was not good....
He had some really nice bits but due to the weather it was difficult to go out for exercise and he's really turned off to weaves... more practise over the holidays M thinks!! 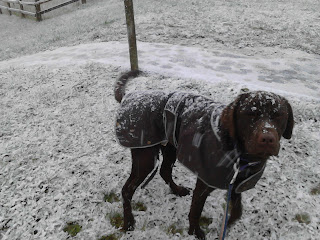 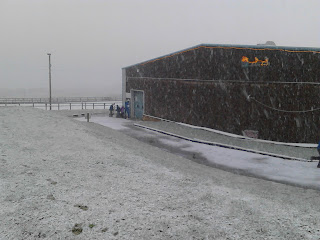 This lovely weather turned into 4-5 inches of snow and with no snowploughs or gritters anywhere to be seen a 1 3/4 hr journey took 4 hours to get home.... roll on January!!

Cadbury
I am an adorable Chocolate Labrador, born in Grantham, but moved to my forever home in Dumfriesshire. I love the outdoors, food and sleeping but not necessarily in that order!!